I’m a huge Douglas Adams fan and am, perhaps, overly familiar with all the different formats of the Hitchhiker’s Guide franchise. My overall opinion of the Disney film (2005) is that it may make a good Disney film (though even that I’m skeptical about) but it makes a horrible addition to the original canon. In this post, I will discuss what they did right and, more notably, what they did wrong. 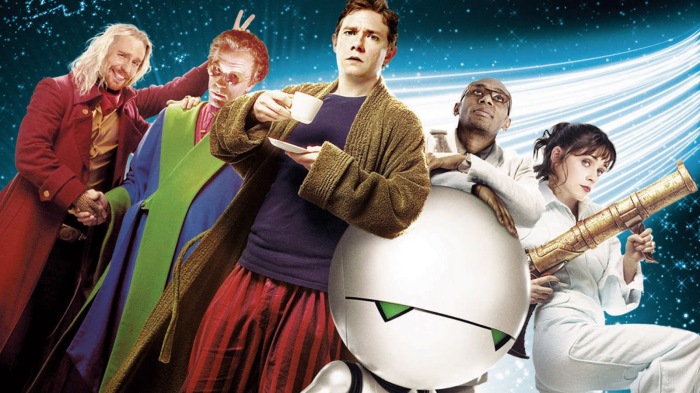 What a phenomenal roster of actors they got to do this film. Martin Freeman becomes more and more popular each year for his award-worthy portrayals–from The Office to Sherlock and Fargo. I’ve always liked Mos Def, especially in The Italian Job. I’m a huge fan of Sam Rockwell’s work (If you haven’t seen Moon yet, what are you doing sitting around here?). Everybody loves Zooey Deschanel, no need to comment. And of course, how could you go wrong with the prince of presence Bill Nighy? And yet…dare I say none of them were right for these roles, or perhaps they were mis-directed or wrongly written. Martin Freeman is a great everyman, but he’s not this awkwardly tall, unpleasant carry-onner that Arthur is supposed to be. Zaphod is, according to the Frogstar, objectively amazing, but the way he’s written, he’s just an outlet for stupid gags about lemon-powered brains. I believe Rockwell could have pulled off cool if the character had been written cool. Deschanel’s an okay fit, but she’s a bit too much the plucky romantic lead rather than the colder astro-physicist who goes off and has a child via sperm bank. Ford’s delivery doesn’t come through because Mos Def mumbles a bit, the pacing is too fast, and they cut all of Ford’s best scenes. (I remember when the cast was announced, people were upset that Ford was black. Really? You’re upset that he’s not a redhead, but you’re not bothered by him having an American accent when he’s meant to be from Guildford, or that six-foot tall Arthur Dent is played by a 5’6″ actor? Grow up.) Bill Nighy actually has the coolness to pull off Zaphod if he were the right age, but Slarti was always supposed to be a bumbling old man, and it’s hard not to see through the dialogue and into the fact that it’s Bill Nighy. 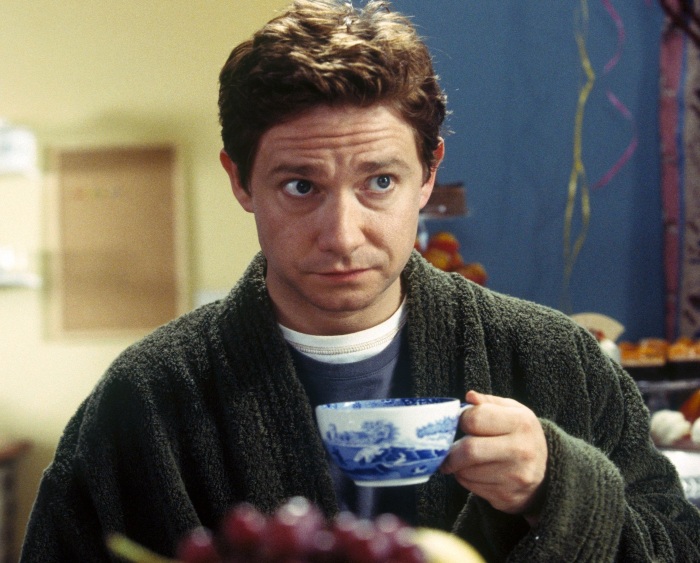 Wow, the dialogue in this movie is fast! Everyone talks so incredibly quickly, you miss all of the jokes, and the ones you do hear lack comedic timing so you don’t laugh. I would be interested to know if anyone reading this blog has seen only this movie version of H2G2 and not the TV or radio version. If so, please leave your thoughts in comments. Do you feel that the pacing in this movie is way too fast? Or, perhaps it just seems fast to me because I’m so familiar with the slower pacing of the TV and radio versions. It’s weird, though, because you would think that they’re doing everything they can to cram as much of the original story in there, and that’s why everyone’s speaking so quickly, but then you have new subplots that go nowhere and an introduction to the film in the form of dolphins singing about fish in an obnoxiously catchy melody. I’m not saying the song isn’t in line with H2G2’s classic songs, but I’d much rather have Share and Enjoy or the Krikkit Song stuck in my head than this operatic So Long and Thanks for all the Fish. Take that out and we could have had the scene where Ford turns into a penguin. But no. 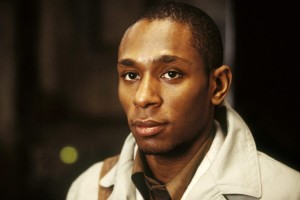 Ford is my favorite character. He lacks understanding of Earth customs, but he’s really smart. He’s a hitchhiker, so he knows a lot about tricking people and using logic to get himself out of sticky situations. He almost always has a plan. This does not come across in the film whatsoever. In an effort to keep the plot moving, they’ve taken out every single bit of character development for Ford. The original begins with Ford using sneaky logic to trick Mr. Prosser into lying down in front of his own bulldozer while he and Arthur nip off to the pub. It’s clever and interesting. In the film, he shows up with a shopping cart full of beer and hands it out to people so that they won’t knock the house down, and yet, Ford didn’t seem to know ahead of time that there were going to be other people at Arthur’s house. It’s lazy writing. The second scene where Ford tries to trick his way out of things is with the Vogon guard. He tries to convince the young vogon to give up this life and pursue something else like music or art. It’s a hilarious bit of dialogue, but it’s completely cut from the movie, and the pair just gets shoved into the airlock without a fight. Once in the airlock, Ford doesn’t even make the joke about there being a switch that will save them, so you lose that light bit of his personality as well. 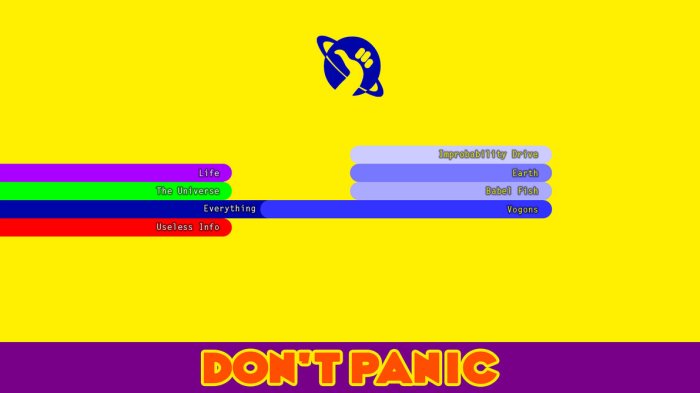 The one bit of casting they got right was the voice actors. Save Stephen Moore, there’s no actor I can think of better suited to play Marvin the paranoid android than Alan Rickman. Likewise, with the Book, if pressed, we could probably come up with a short list of worthy candidates, but I doubt I could vote for anyone but Stephen Fry. Fry was actually Douglas Adams’ house-sitter for a while, as you’ll know if you watched Fry’s Last Chance to See, a sequel to Adams’ book by the same name. I wasn’t as thrilled with the Book’s artwork, but I don’t know what I was expecting. The TV show had hand-drawn art that would have been too retro to keep a modern audience’s attention. But, there’s an irony here that works, even if Disney didn’t intend it. The Book is a commercial item, as evident in how it later gets bought out by another company (owned by the vogons) and redesigned. This flat, contemporary poster art would likely be what the Book would look like if it were real. (For the record, the Book is real. We call it Wikipedia, or more broadly the Internet, but it’s curated by the masses and not by selected researchers like Ford, and it doesn’t have consistent artwork throughout.) 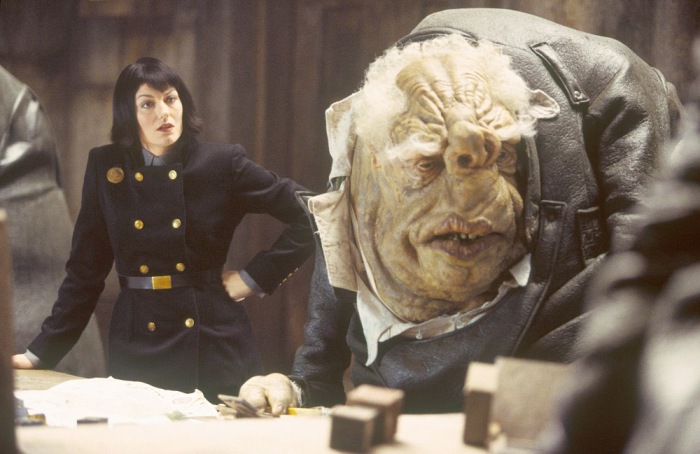 The Things They Kept — Right! 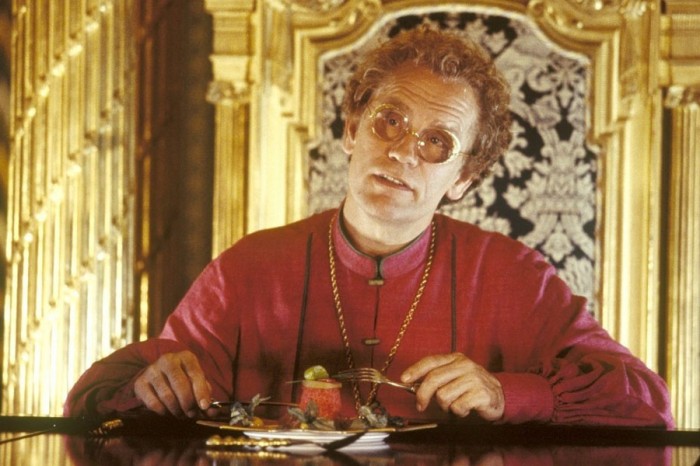 We really could have done without John Malkovich’s character in this movie. Humma Kavula does not appear in any other part of the franchise. Perhaps Douglas Adams did invent him, I don’t know. Afterall, he did help write the original draft of the screenplay ten years before it was made, but by having this evil, spidery villain who is at war with Zaphod over the presidency, it takes away the emphasis of bureaucracy being the main threat to our existence. It also causes this tangential subplot that pulls us away from the main story of getting to Magrathea and finding out about the Ultimate Question. Honestly, if you were to walk out of the room for fifteen minutes and come back when they are headed to Magrathea, you wouldn’t have missed anything, except that it’s Zaphod’s fault that the Earth was destroyed, which is an addition I’m not sure exists in any of the other versions. 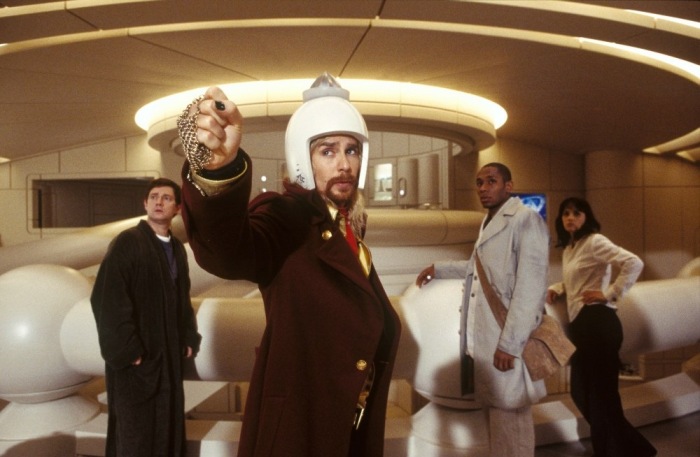 It breaks my heart to say it because Sam Rockwell’s such a terrific actor, but I hated the portrayal of Zaphod in this film. It’s largely the writing and directing, I think. He’s got an American accent and cowboy boots, so given the era this was made, he’s meant to be a satirical version of George W. Bush. This is not far from what Adams’ would have wanted, as I think Zaphod was always meant to be a jab at American presidency. But, as much as you may despise his ego, he’s not supposed to be wholly unlikable, overly stupid, or crazy. He’s meant to be interested in excitement, adventure, and really wild things. Rockwell’s Zaphod is interested in becoming famous by discovering the Ultimate Question, which is why he wants to go to Magrathea. We know that Zaphod hates Arthur because he has feelings for Trillion, but it’s strange that they left out the scene where Zaphod purposely abandons Arthur on Magrathea. (Instead, Arthur just accidentally doesn’t follow them to Deep Thought.) Zaphod has a fight with his second head, making him look crazy. His brain is powered by lemons. And in a big twist away from the canon, he has his second head removed by Humma Kavula. Then there’s a matter of special effects. I think we live in an age where they could have given him the second head and still made it look pretty good, but they took a cheap way out and made the head hidden underneath his neck. The three arms are there, but not really used. And as for multiples of anything else, in the film, Arthur jokes to Trillion, “Anything else he’s got two of?” but actually, on set of the TV show, the actor Mark Wing-Davey did have a second willy done for him, even though it’s not visible underneath his long robe. 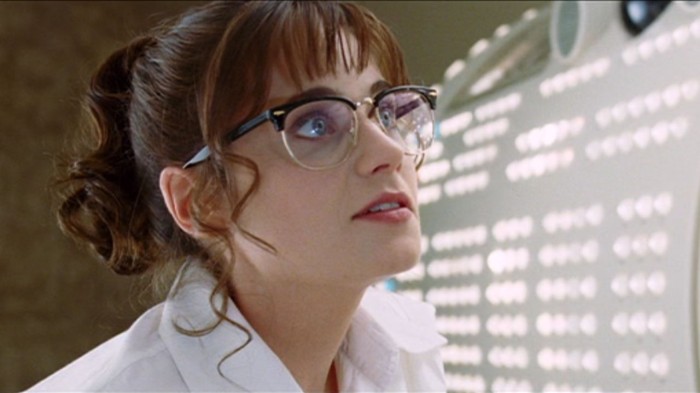 The ending is entirely reset, meaning in a new setting. Ford, Zaphod, and Trillion physically go to Deep Thought rather than just learn about him/her. (Deep Thought, by the way, is now a female computer voice.) Slartibartfast takes Arthur to Earth mark 2, even though in the original, it hadn’t been built yet. The dinner party scene with the white mice explaining how they need to take out Arthur’s brain is relocated to Arthur’s dining room. Instead of Arthur just running away, Disney ups the stakes and has Arthur tied down with a James Bondian blade spinning toward his head while he desperately tries to come up with a good Ultimate Question. This spirals down into a soppy confession of his love for Trillion, only shortly after Trillion had confessed via point-of-view gun that she loved Arthur. How very Disney. In the original, Arthur and Trillion never get together. (They have a daughter together, but only because Trillion visits a sperm bank where Arthur had visited whilst he was short on cash.) Then an army of vogons on foot show up at Arthur’s door in a very un-Adamsy manner and start shooting at them. The vogons have, in this scene, become sort of the classic bad guy and not the office clerks they’re meant to be. But, of course, Marvin saves the day, the new Earth is going to be finished, and Arthur and Trillion are in each other’s arms. Zaphod doesn’t care because he has found some other woman invented for this film. Ford offers to take them to the Restaurant at the End of the Universe, the title of the second book, and not a place that the characters ever go to on purpose. It’s a good Disney climax, but it’s all a bit rushed and lazy, lacking the spirit of any of the original.

4 thoughts on “The Hitchhiker’s Guide to the Galaxy, Disney film”